So here I am, sitting in my Italian hotel room in Milan’s Piazza Diaz, two blocks from Il Duomo, flipping through a book on French fashion by an American, and thinking about my green German umbrella that I bought to take to India, its black British replacement, and their tie to the color yellow. 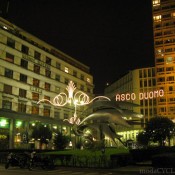 So here I am, sitting in my Italian hotel room in Milan’s Piazza Diaz, two blocks from Il Duomo, flipping through a book on French fashion by an American, and thinking about my green German umbrella that I bought to take to India, its black British replacement, and their tie to the color yellow.

Let me start at the beginning.

Nine and a half years ago I was in the Frankfurt airport waiting for a flight to India to make a documentary for Herman Miller. I knew it was starting to be monsoon season, and I had not packed an umbrella. My favorite umbrella was a beige compact Knirps model with a blue and brown geometric pattern and a brown handle, which my mother had bought in Germany at least 15 years prior. The button sticks a bit, but it still works today. So, I went looking through the airport for a stand-in, and found a selection of Knirps umbrellas on display in a gift shop. I picked a green one with yellow and orange squiggles. Fast forward February 2008 and New York Fall Fashion Week in Bryan Park, where I interviewed Reem Acra for the satellite radio show I was trying to get off the ground, in which she said her customer was a “woman of luxury.” Now jump to September of this year and New York Spring Fashion Week at Bryant Park, when modaCYCLE photographer Sandy Ramirez had commented that there was yellow in almost every collection. From Carolina Herrera to Zac Posen, at least one splash of something between canary and saffron. Now, it’s in the news, yellow is going to be big this spring, Sandy was quite right. Although, I think his “yellow is the new black” comment was a little overreaching. Black is black, and it isn’t going anywhere. So, today I was walking through Piazza del Duomo when the handle snapped off my 9 year-old umbrella. I was on the way to visit the Blumarine showroom in Milan. In speaking with the press agent, she described the Blumarine target customer as “a woman of luxury.” Déjà vu! After the interview, I wandered around Via Montenapoleone and its surrounding streets with a handle-less spike in my hand, looking for a replacement umbrella. I didn’t want one of the 5 Euro models being peddled by pushy street vendors; they didn’t look like they would last a week. No Knirps in sight, but there was Burberry, and I figured that the Brits have a lot of rain, so their store probably sells umbrellas (I went into Gucci first, but balked at the 370 Euro price tag on the compact). I was fairly upset that my umbrella had broken, and I asked if there was a warranty on the Burberry umbrellas. A one year guarantee, and after that maybe they’ll help you, maybe not. The salesman seemed confused as to why I thought an umbrella should last more than nine years. For what they were asking people to spend on them, I would think a 10-lifetime guarantee might be justified. My hand was starting to blister from holding the broken one, so I bought it anyway. We’ll see how it lasts.

On the way back to my hotel, I pondered the merit of our disposable culture. I had passed several shredded 5 Euro models on the ground in my search for a reliable model. What is a “woman of luxury,” I thought. Is that just a description of someone’s spending habits? The target customer is the person who throws everything out every 6 months and starts over? Perhaps that makes sense from a medium-term business standpoint. It doesn’t sound like sustainability though. Of course, Reem Acra and Blumarine’s Anna Molinari are designers who still use fur with a vengeance, so sustainability isn’t exactly their modus operandi. When I ask what is a luxury to me, it is peace of mind. To me, buying a luxury item should mean knowing that you have bought something that has value, beyond the brand name. Durability is my idea of luxury. Also, I think I’m personally a lot more interested in women of substance than these supposed women of luxury, whose luxury is perhaps a state of never having to really live with decisions about their purchases. Fifteen minutes after I left Burberry I found a Tumi store, where I could have purchased an umbrella with a better guarantee for half the price. If I hadn’t gotten the Burberry umbrella wet already, I would have taken it back and purchased the Tumi instead.

Back in my hotel room I continued reading Valerie Steele’s book Paris Fashion: A Cultural History

. Specifically, I was in chapter four, where she talks about Balzac’s descriptions of his characters by their clothing, and how the “yellow was traditionally the color of treason and envy.” I thought green was the color of envy. That was the color of the light Gatsby covered over with his thumb, right? I wonder if this was in the minds of all those designers who dropped yellow dresses into their spring lines. How will it play in the context of the current global financial crisis, as the line between the haves and the have-nots becomes increasingly defined as desperate? Will there be people who specifically buy a yellow dress to be fashionable? This is certain. Are there really people who drop 370 Euros for a compact umbrella? I fear so. Was it yellow? No. Were most of the shredded 5 Euro umbrellas I passed laying in the street yellow? No, but in 12 months they probably will be.