While hanging around Saks on Fashion’s Night Out, I noticed a woman dressed exactly like the mannequin next to her. She turned out to be designer Yoana Baraschi, standing outside her in-store mini-boutique. 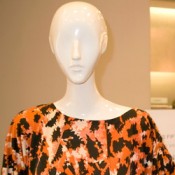 story and photo by Sandy Ramirez

While hanging around Saks on Fashion’s Night Out, I noticed a woman dressed exactly like the mannequin next to her. She turned out to be designer Yoana Baraschi, standing outside her in-store mini-boutique (one floor above Chanel’s, right at the elevator), wearing a piece from her Fall 2009 collection. END_OF_DOCUMENT_TOKEN_TO_BE_REPLACED

Steven Cox and Daniel Silver showed their Spring-Summer 2010 Duckie Brown menswear collection at Mercedes-Benz Fashion Week in New York. Sandy had a few minutes with them back stage before the show. 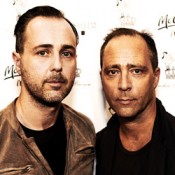 interview and photos by Sandy Ramirez

Steven Cox and Daniel Silver showed their Spring-Summer 2010 Duckie Brown menswear collection at Mercedes-Benz Fashion Week in New York. Sandy had a few minutes with them back stage before the show. END_OF_DOCUMENT_TOKEN_TO_BE_REPLACED

“I am in love with clothes, and actually it’s rare that you are catching me alone. My husband and I both love clothes and usually go to shows together. It’s kind of funny, we were laughing at ourselves that maybe one of these days we would see Cho Cheng together. Last season I couldn’t go but he did, this season he couldn’t go but I did. Between the two of us we cover it.” 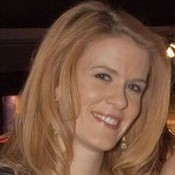 story and photo by Sandy Ramirez

A short interview, outside the McDonald’s McCafe concept shop in the lobby at Mercedes-Benz Fashion Week, with Alex McCord of Bravo’s Real Housewives of New York City series. END_OF_DOCUMENT_TOKEN_TO_BE_REPLACED

“On a visit to The Peabody Museum, I saw an exhibit of photographs from the Edo Period (1850’s) in Japan, just after they had opened the country to rest of the world. These were hand-painted photos designed to attract tourists of that period to Japan. What caught my eye was the serenity of the images, [and the] bright colors that the hand-painting brought to the photographs. You can see it most in the colors and embroidery in my collection for this season, if not the actual silhouette.” 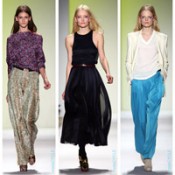 Adam Lippes is the designer behind ADAM, a label which showed its Fall 2009 Collection on Valentine’s day here at New York Fashion Week.

END_OF_DOCUMENT_TOKEN_TO_BE_REPLACED

While enjoying one of the new McCafe Lattes, I had the chance to talk with fashionista and stylist Rosemary Ponzo. Rosemary (a native New Yorker) has styled film and television productions for clients ranging from Sam Raimi to the History Channel. With camera, and coffee in hand, and after disavowing all connections to The New York Post, I began asking her a few questions.

While enjoying one of the new McCafe Lattes, I had the chance to talk with fashionista and stylist Rosemary Ponzo. Rosemary (a native New Yorker) has styled film and television productions for clients ranging from Sam Raimi to the History Channel. With camera, and coffee in hand, and after disavowing all connections to The New York Post, I began asking her a few questions. END_OF_DOCUMENT_TOKEN_TO_BE_REPLACED 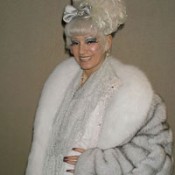 While waiting for the Venexiana show, I met one of Fashion Week’s Grande Dames, Cognac Wellerlane. Cognac has a TV show and website called Cognac’s Corner out in Los Angeles, conducting interviews of celebrities and fashion luminaries in the City of Angels.

5 Min – What is behind your super style ways?

CW – I have a passion for fashion! I love the Hollywood & New York lifestyles. The glamour and glitz of it all.

5 Min – From all the Fashion Weeks you’ve attended, what have you found most memorable?

CW – Having all those PETA people yelling at me because I wear fur. It happens every time I come here. Another thing I remember is Donald Trump running in and kissing Beth (Howard Stern’s wife) while I was interviewing her. It ruined my interview!

5 Min – Who haven’t you interviewed yet that you really want to talk to? 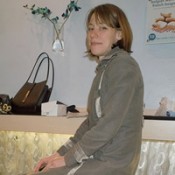 While grabbing an order of steak frites at F&B on 23rd Street between the Rag & Bone Show and hitting the Malan Breton installation, I noticed a young woman in a very catching coat. After letting me take her picture, she told me she was a magazine editor. This was Michelle Heller, formerly of In Touch magazine, and currently freelancing.

When asked about her coat, she said she simply found it at The Gap back in 2005. What attracted her most to the coat was it’s distinctive style, a color that brought out her eyes, and the fact that it was so affordable. When asked what her street style says about her to the world, she replied “arty, kooky, and Parker Posey.” 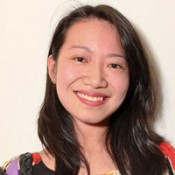 Mingling at the Malan Breton presentation, I met the webmistress of The Fashionable Matilda, Edith Moy, who was standing around in a lovely Madison Marcus dress. She told me she knew of Malan’s work because of Project Runway, and was curious to see the new “fashion installation.” She recalled that his previous seasons had a very “Couture-ish” feeling, and was impressed at how his current season shows such a strong day-to-evening versatility.

While enjoying the fresh air outside The Mercedes-Benz Fashion Week Tents in Bryant Park, I happened to meet Mechante of London designer Deborah Lyons, who explained her visit to the U.S. as “for the design and New York.” That, and the fact that the shoes she designed were part of several shows this week.

Clad in fashionably feather-trimmed coat of her own design, and clutching her Miu Miu bag as a shield against all things, she related her shoe design philosophy. In her words, she designs “fashionable, comfortable shoes. I am a woman designer, and I want to design fashionable things that women can wear all day, and be comfortable.” This season that tact focuses in metallic iridescent colors.

Fashion shows at the level we see here in New York Fashion Week are an enormous undertaking. Besides the army of publicity people who promote the shows and get the right people in to view the designs, the actual design and manufacture of the textiles and clothing, and the efforts of groups like IMG Fashion, The Fashion Calendar, and the CFDA to make it all work together, there is the actual logistics of getting the spaces ready for each designer to present. Building the runway, repainting the backdrops, and setting up the lighting, that seemingly invisible process, is handled by The Ground Crew. The vast majority of physical production, without which none of the events would occur, is handle by them. I got to spend five minutes with Betty “B.P.” Cole, President of The Ground Crew just outside the tents as she was headed over to the Charlotte Ronson show to take care of a few last minute details in the production.

The Ground Crew started back in the 80’s, when Audrey Smaltz and Cole had a vision, that designers needed a one stop for the actual theatrical logistics needs of a fashion show. Starting out by producing various shows for local designers in the Bronx in industrial spaces and showrooms, word soon got around of this two woman team that could handle it all. Building up with early clients like Donna Karan, the business quickly became a success.

Today Cole supervises the production of over 50 shows, both in The Tents and beyond Bryant Park, including BET’s Rip the Runway.

When not producing shows, she relaxes by working on a documentary photography project on Spanish Harlem, where she grew up.