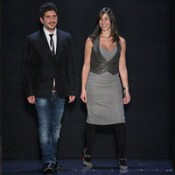 story and photos by Sandy Ramirez

Wednesday night, Eran Elfassy and Elisa Dahan premiered their label’s Mackage F/W 2009 collection at Mercedes Benz Fashion Week in The Salon at Bryant Park. “Mackage,” a named derived from a mispronunciation of the french “maquillage” (make-up) by Eran’s young niece, is a label that was itself born in school children’s day dreams. While in elementary school in Montreal, Eran and Elisa used to sketch together and dream of being fashion designers. They always hoped to show in New York. Now, that dream is normality.

When asked, they says they want to be known as the designers that “re-invented the coat.” This collection, although perhaps not such a definitive stab, is certainly reaching toward that goal. “We wanted to do a collection of coats and that is what we did,” mentioned Eran.

Forty distinct cuts and style of coat were presented. Hearkening back to the early 90’s cyber-punk styling, this eclectic collection of contrasting textures, sharp fits, and just pure synergy traversed the runway. The palette was primarily dark neutral tones accented with light contrasting neutral tones (deep blacks accented with light browns for example), with the occasional splash of green, reminiscent of the tones ones see in the wilds outside of Montreal in the winter.

Where this collection will lead the Mackage team is yet to be determined, but for now with this dream accomplished, they will aim higher still.