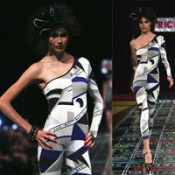 It has been more than a year since Heatherette dropped off the fashion radar, and New York Fashion Week has just not been the same without their shows. Now, beloved former Heatherette duo frontman Richie Rich is back in the game with a solo label that he has bestowed with his own playful moniker.

END_OF_DOCUMENT_TOKEN_TO_BE_REPLACED

For last fall, Carolina Herrera produced an array of stylish looks that seemed inspired by the leisure of English hunting parties and 60’s uptown girls. Models paraded out onto a bright runway with feathers literally in their caps, clad in double breasted power vests, and wearing riding boots obviously meant for strutting.

This time, no such affectations. Clean lines, elegance held close to the body. Braiding and silk cascade gracefully to a far more conservative tune, with elegant embroidery providing inborn detail. 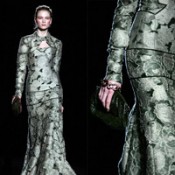 For last fall, Carolina Herrera produced an array of stylish looks that seemed inspired by the leisure of English hunting parties and 60’s uptown girls. Models paraded out onto a bright runway with feathers literally in their caps, clad in double breasted power vests, and wearing riding boots obviously meant for strutting.

This time, no such affectations. Clean lines, elegance held close to the body. Braiding and silk cascade gracefully to a far more conservative tune, with elegant embroidery providing inborn detail.

END_OF_DOCUMENT_TOKEN_TO_BE_REPLACED

No revolutions in accessory design this week, but much like what Andy and Debb marched down the catwalk two nights before, Marc seems to be pulling out the 80’s style guide and rewriting it with gusto. At first glance, simple lines, simple silhouettes, but looking closer, my God, it’s made of stars! All the outlines are tremendously complex embroidery and patterning of myriad non-fabric objects. Beyond the demi-Couture outfits was almost a whole other line. Vibrantly colored coats and ponchos were paraded out with hair and makeup that really should have been accompanied by The Eurythmics’ Sweet Dreams. 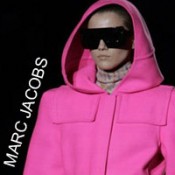 Either Marc Jacobs’ PR machine is on a celeb-free diet, or everyone was over in The Tent at Bryant Park for William Rast. Whether the paparazzi-magnets showed up not, the color and detail sure did, in this skillfully-executed collection. END_OF_DOCUMENT_TOKEN_TO_BE_REPLACED 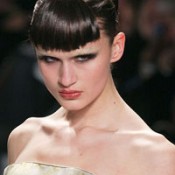 Venexiana LTD, of New York and Venice, and their inspired designer, Kati Stern, did not disappoint at the Venexiana Fall 2009 gala in The Salon at Bryant Park.

For being relatively new to the set, having launched her line in 2004, Stern certainly commands rapt attention with her innovative takes on classic looks.

This season’s collection, which we are told was influenced by Barbie designs down through the years, would indeed make any woman feel like a living doll. Stern’s designs “wow” in a way that allows the wearer to be playfully girlish, yet empowered as a woman, supported by both strong tailoring and softened lines.

Despite the efforts of the animal rights activists gathered in force out front, Stern sent rock-n-roll elegance down the runway with furs flying. 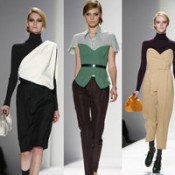 Seoul to New York dynamic duo Andy & Debb presented to a packed house at The Salon in Bryant Park on Saturday night, with admirers and buyers angling for an opportunity to view the new Fall 2009 Collection. END_OF_DOCUMENT_TOKEN_TO_BE_REPLACED

story and video by Charles Beckwith
photos by Freda Henry

When asked why he holds his show in the East Village, Telfar replies simply, “that’s just where I’m at.”

Black, gray, navy blue, and camel tan were the foundation colors. Jump suits and mens’ skirts were the standout statement pieces, and the man had zippers on everything. There were some interesting inserts of jewelery matched with a few looks. It is a classic punk East Village rush in the high gloss of New York Fashion Week.

Here is a video clip with some backstage still shots and all the runway looks:

story and photos by Darrah Leffler

With his evident “Luxury as a lifestyle” concepts, Diran’s “Armor” designs seriously suit up the wearer for just that. In both his men’s and women’s designs, which he folds into a single show, Diran does not play to the fears of the fashion or politically meek, using combinations of tweeds, lambskin, angora, fur, and a slim classically “chic” outline for the entire collection.

This collection includes such instant favorites as the Cashmere Tee and Tweed Corsets while putting together looks that easily allow the use of such phrases as “Bolero Jacket” and “Samurai Pant” in the same sentence. A combination of deep tones and neutral shades along with natural fibers and materials for these designs make these sleek looks eminently wearable in the long-term.

Though subdued for a nod to Couture, the Loris Diran Fall/Winter 2009/2010 “Armor” collection is undeniably eye-catching.

German designer Michael Michalsky chose an unusual location to present his Fall/Winter 2009 collection for Berlin Fashion Week. The Zionskirche is an old church in serious need of renovation, and it perfectly set the stage for “Saints and Sinners.”

The impetus for this particular collection was a reaction by the designer to Pope Benedict XVI’s archaic stand on homosexuality. Priestly robes and The Church’s current ideas about sin were literally his afflatus, from which the new collection arose. END_OF_DOCUMENT_TOKEN_TO_BE_REPLACED

More of the laser-cut leather we’ve been seeing lately, but this time also with highly-detailed hand-embroidery.

END_OF_DOCUMENT_TOKEN_TO_BE_REPLACED

These are some of the Fall 2009 garments and accessories already on display in the Vivienne Westwood store in Milan.