Mr. Chakra began his career as a classic couturier and only last year did he step into the maelstrom of worldwide ready to wear. Mr Chakra has been showing at Paris Haute Couture since the 2002 season and has cultivated a large and loyal following amongst his clientele, but at the price points his dazzling skill commands there are only a small number of stores that will purchase from his collection. His 46-piece Spring 2011 collection then represents an opportunity that takes on massive importance. 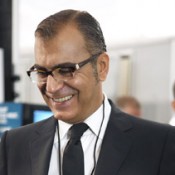 “And of course you have to stay current with what is on trend, what is modern.” – Georges Chakra

The designer’s words a few hours before the unveiling of his Spring 2011 collection speak to the grand riddle of fashion design. A fashion designer is really just a term for an artist whose medium is cloth. In fashion we have pop artists, commercial artists, those with stratospheric talent, and everything in between. Success can come in many forms and there is room for all. However, in international ready to wear there is only one way to succeed; a designer must sell a great amount of clothes a minimum of two times per year. They must design clothes that women will buy and that often means compromise and subjugation to current whims.