To be at the premier of anything is a special thrill. To be at a premier which contains not only the first night for the Brooklyn Fashion Festival but is also hosting the very first collections of many of Brooklyn’s most promising designers was a special treat. I was lucky enough to be backstage interviewing the designers and getting not only their take on their own collections but on fashion and design in general. 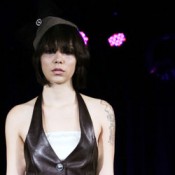 To be at the premier of anything is a special thrill. To be at a premier which contains not only the first night for the Brooklyn Fashion Festival but is also hosting the very first collections of many of Brooklyn’s most promising designers was a special treat. I was lucky enough to be backstage interviewing the designers and getting not only their take on their own collections but on fashion and design in general.

First up for the evening were Andrew Lane and Andres Gonzalez’s label  +AA- . This passionate duo produced a very beautifully balanced collection which has a tremendous potential. I asked the duo about their feelings on this very special night. “Excited but nervous, the changes, the model changes, I’m wringing my hands about the changes but I’m sure it will go smoothly.” (It went perfectly.) I also asked the pair what their greatest challenge was in creating the collection, “This fabric shifts in a second, I mean you know it looks like water. The challenges are working with the fabric, the choices of color and the fabric, and the overall aesthetic is always the fun part.” 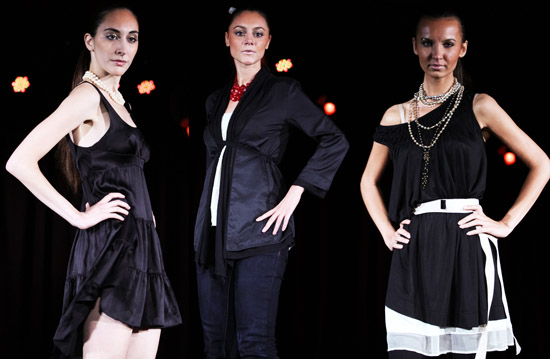 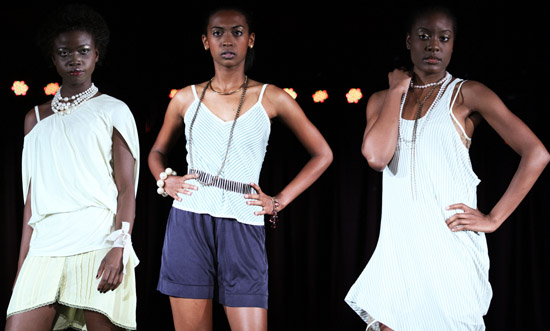 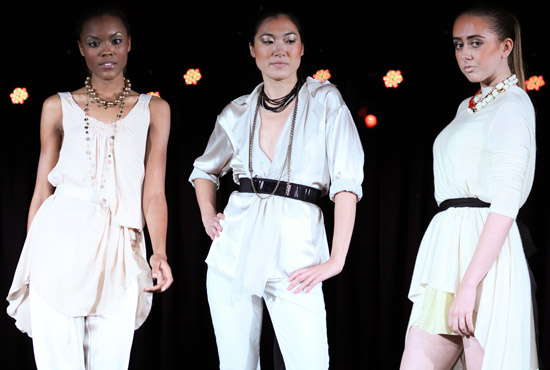 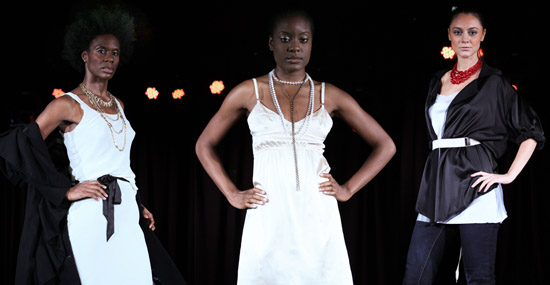 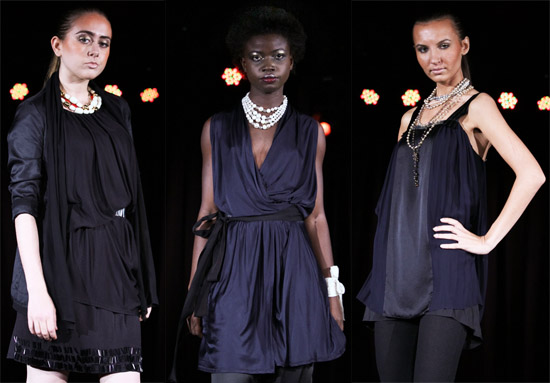 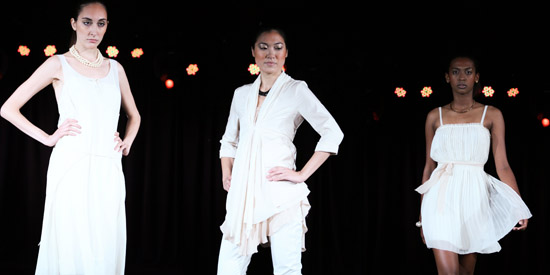 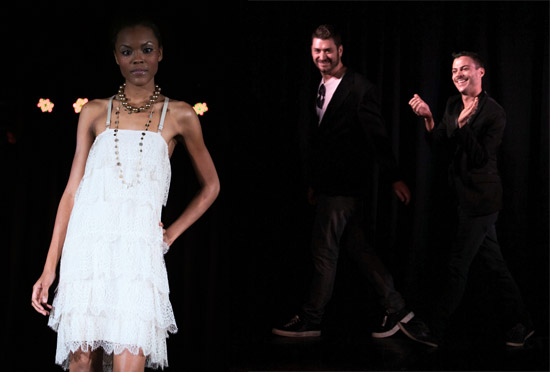 The second collection of the evening was quite a departure from the softness and flow of the first. James Yoest’s experimental shapes and cuts were his attempt to foster change. “I go for an avant garde look, I’m trying to break the boundaries of silhouette and trying to work with a woman’s body in a different way.” Yoest is trying to create a signature look very early on his career, that can be a commercial risk but Yoest knows no other way “I feel as if I’ve always seen that in my head, my thing is the structure but with the slouchy loose look, that’s what the James girl wears.” Yoest is hopeful that his layered separates will broaden his commercial appeal. The fact that he is aware that his aesthetic could present him challenges commercially and is already imagining ways to deal with that without compromising his vision should serve him well. 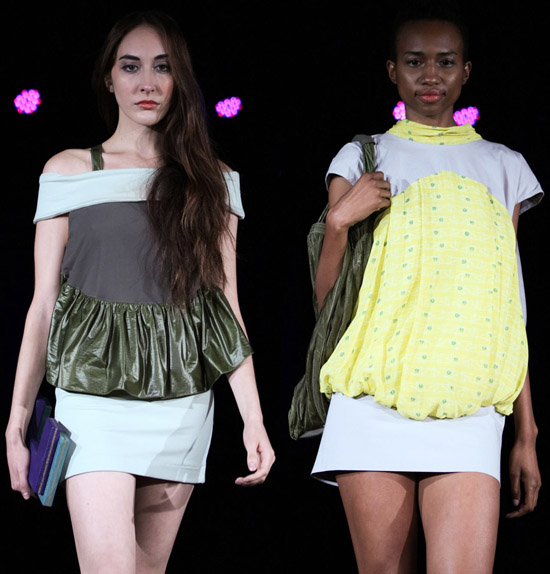 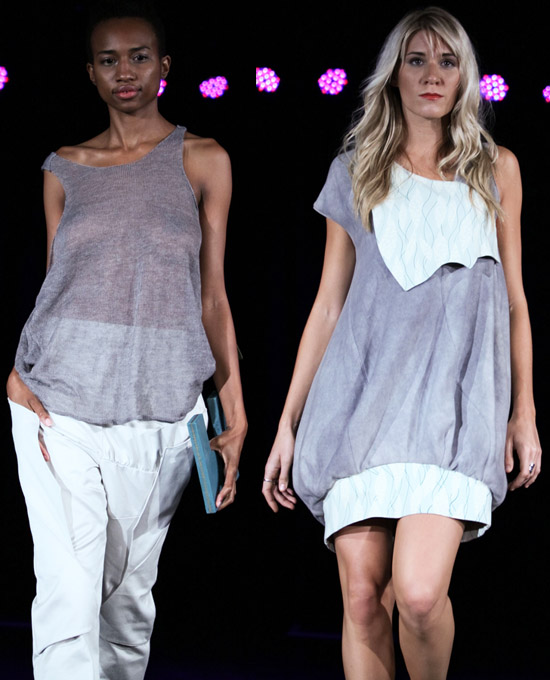 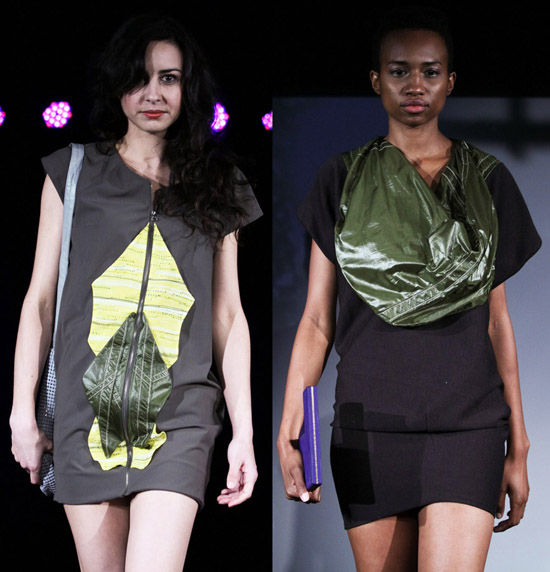 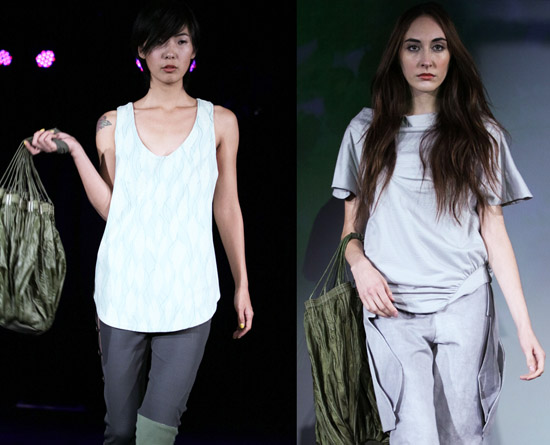 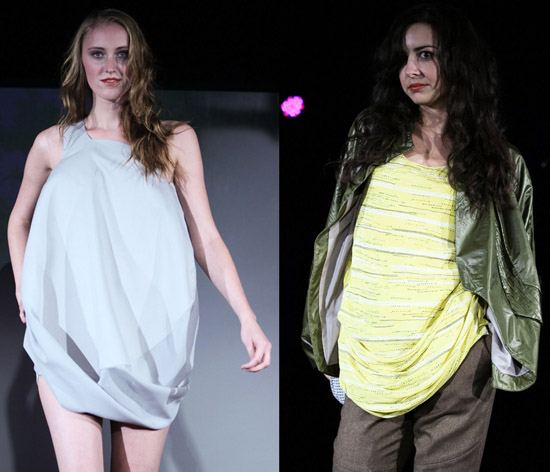 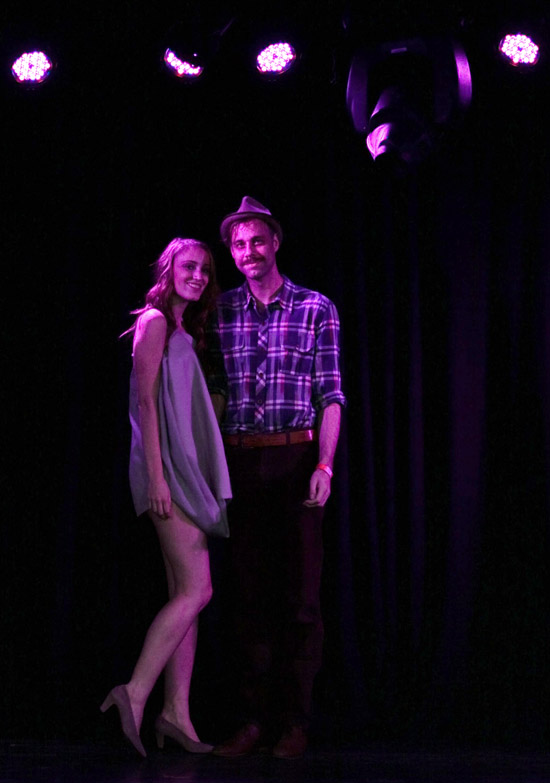 The next volley in the BFF’s opening salvo was the collection of Jade Chiu which she named Zodiac 12. “For me, I really liked using animals for inspiration because each one has its own portrait and personality. Take for example the dragon, the braids represent the scales and the collar the long neck.” Jade kept an eye towards versatility and  tried to create pieces that although they were specific to each animal inspiration could be matched and mixed across the whole collection. “I really tried to think about what a girl would or could do with my collection.” My favorite thing that Jade told me as we spoke was, that she was “trying to bring the Asian idea of beauty into a Western form.” How very, very Brooklyn of her. 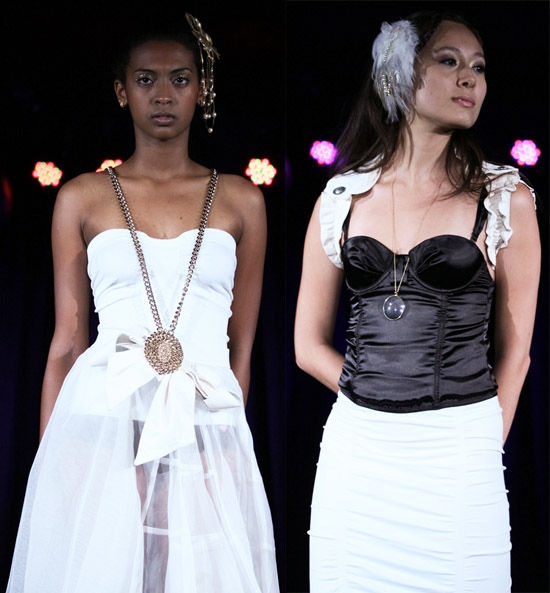 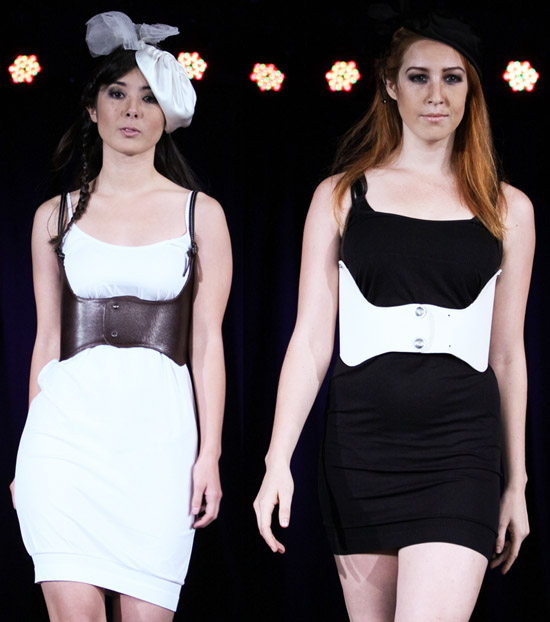 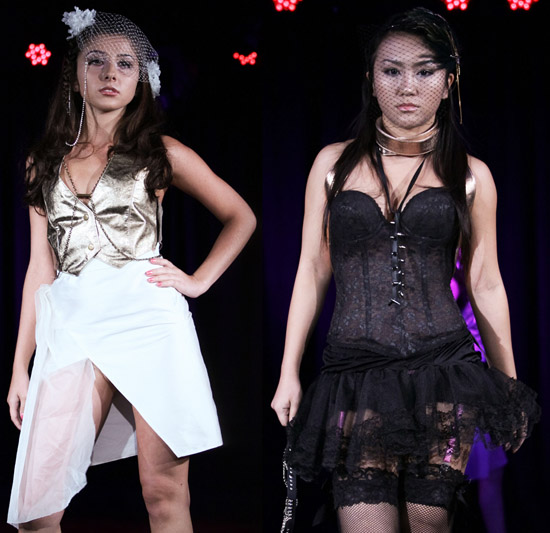 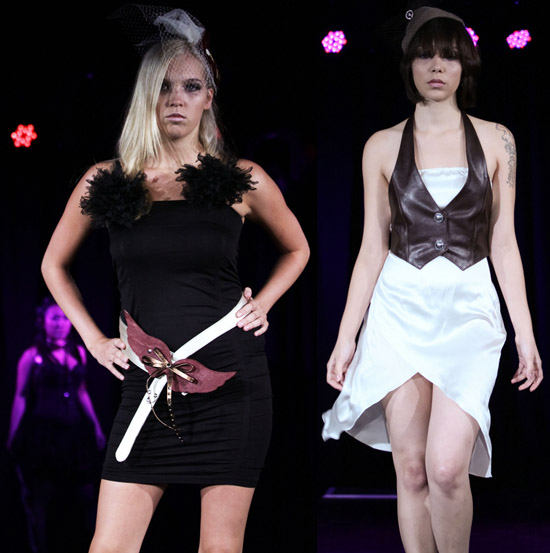 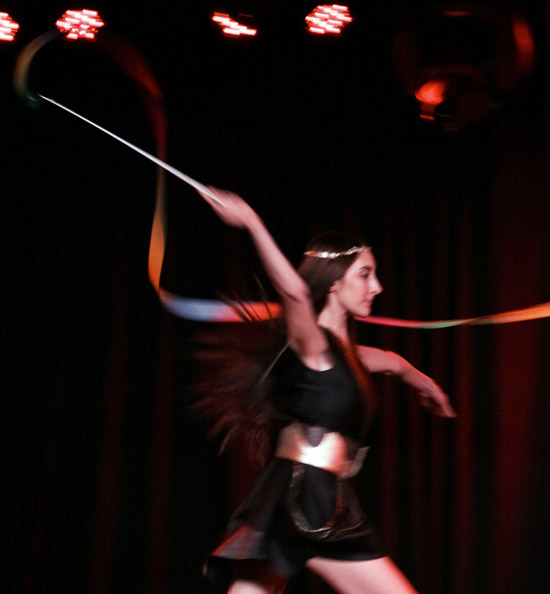 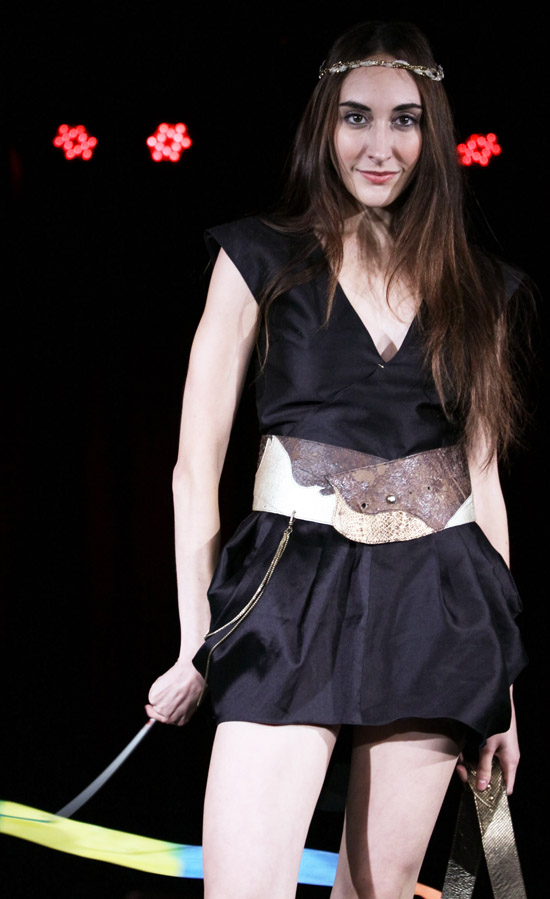 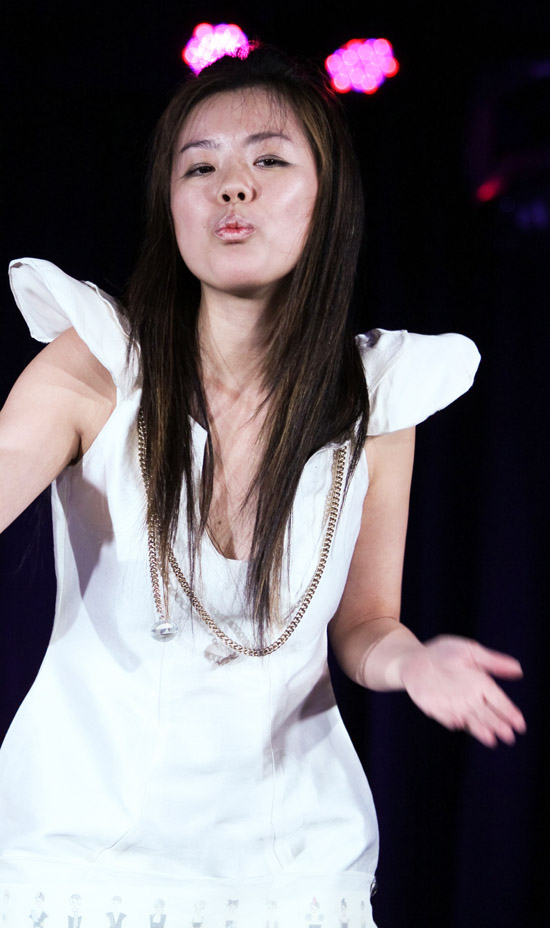 The last show of the evening was Thomas Ando-Hart’s very 80s inspired androgynous designs. “The collection is inspired by the punk rock ethos of D.I.Y and the idea of just wearing whatever you want, as long as you look cool.” The models had the painted faces that likened them to Bowie or Adam Ant.  Despite Ando-Hart’s references to punk, the collection was smooth and had a polish to it. “I very much like the classic look, the single button suits of the twenties were just the most amazing thing I can think of.” One of the most amazing things about Ando-Hart’s collection was that he put together 14 looks and  a show with live music in less than a month. The ability to reach out and grab an opportunity without worrying about whether or not you are “ready for it” speaks very well of this young designer. 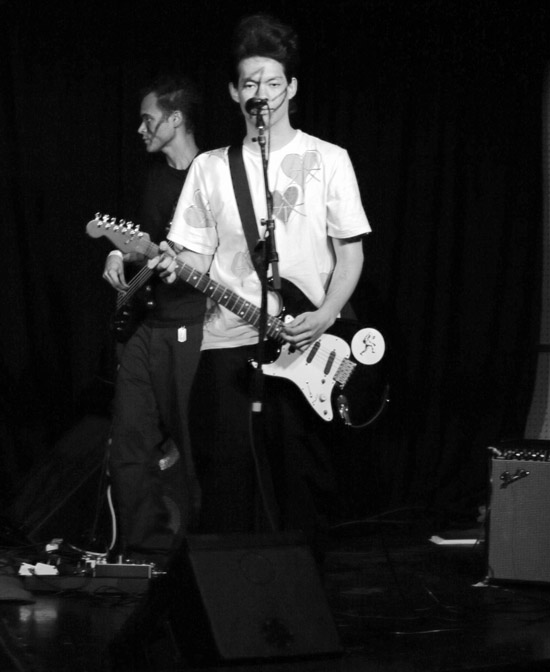 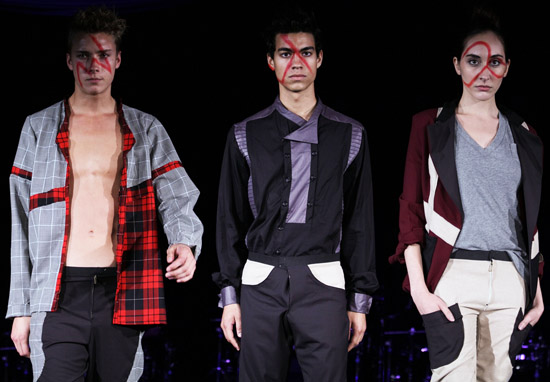 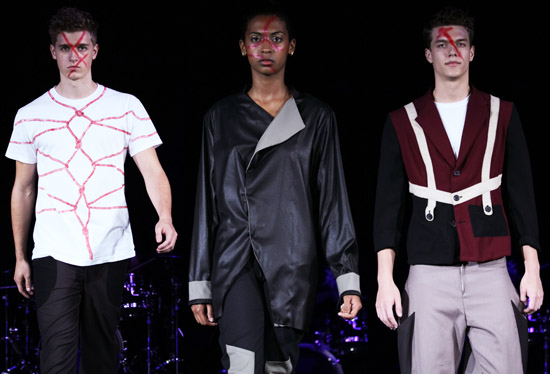