His collections appear fairly straight forward at first but you can never be fooled by seeming simplicity from great designers, there is invariably more going on in the clothes than you think there is. 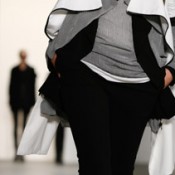 Austerity, severity, restraint. No, I’m not speaking of the debt crisis or of finance at all. I’m describing Rad Hourani’s Spring 2011 collection. Rad Hourani’s art for Spring was all of those things, but still crackled with creative energy that felt caged by his cuts and colors. The collection was black, white, and gray yet it still felt vibrant. This is all part of the complicated nature of Rad Hourani’s clothing. His collections appear fairly straight forward at first but you can never be fooled by seeming simplicity from great designers, there is invariably more going on in the clothes than you think there is.

Mr. Hourani’s look is sharp and edgy. Not edgy as in the hollowed out and vacuous verb that is supposed to denote “different than normal,” edgy as in literally possessing strongly defined edges. Yet despite the strong sharpness a certain suppleness is retained in his clothing which keeps them from being unfriendly to prospective wearers. He has worked skillfully with geometric shapes and layering, it often reminds one of origami, and with his choices of materials and construction. One of the design features in his Spring 2011 collection that strongly communicated that feeling of restraint I mentioned was his decision to use a smaller scale of asymmetry where rather than a broad section or whole panel being asymmetrical to the rest of the garment, it was a detail or lesser section of fabric. Those, along with a half a dozen or so other discriminating selections, are the details that you’ll see if you really look closely at Rad Hourani’s work. 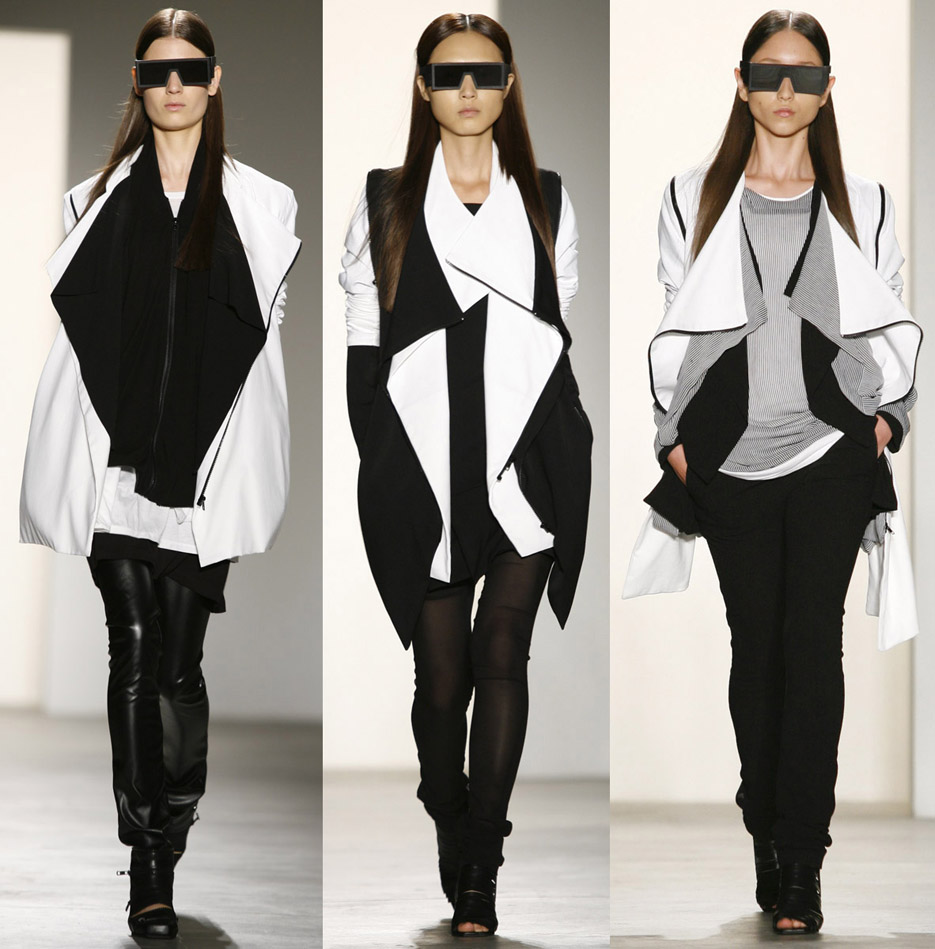 I’m aware that Mr. Hourani himself calls his clothing unisex, so please excuse my arrogance when I say that doesn’t quite fit. It’s more about the context than the term though, because unisex tends to conjure up dull, loose-fitting, non-flattering clothing. This is most definitely not Rad Hourani; his works are very sexy in a so cool its frosty sort of way. 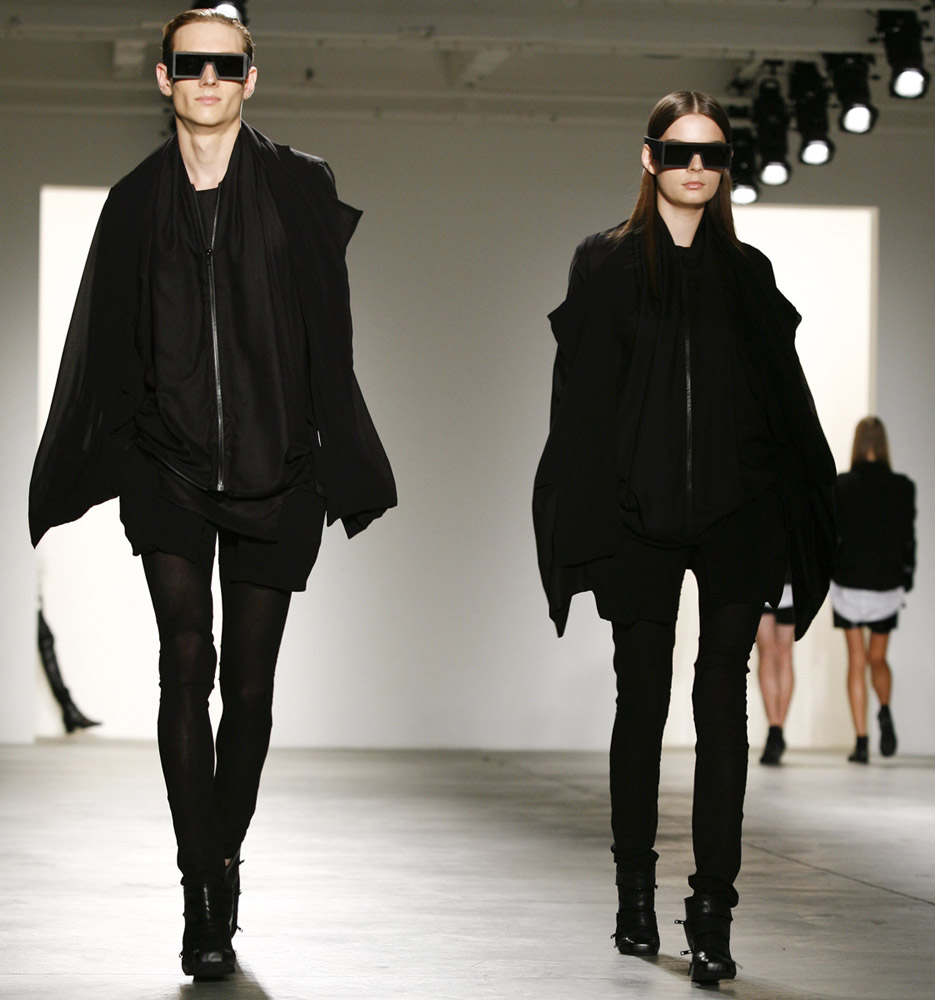 This season his addition of slick and sexy leather boots and detailing gave his pieces a real punch of power and erotic appeal. The man or woman who wears Rad Hourani likes the attention that cutting a different path brings, but not in an insecure egotistical way. Its more a statement of “I’m confident and I like that it makes me different than most.” The idea of power being controled and strength being directed was very evident in Rad Hourani’s Spring 2011 collection. He, along with a handful of other NYC based designers, are confidently showing the way forward to the future of clothing. 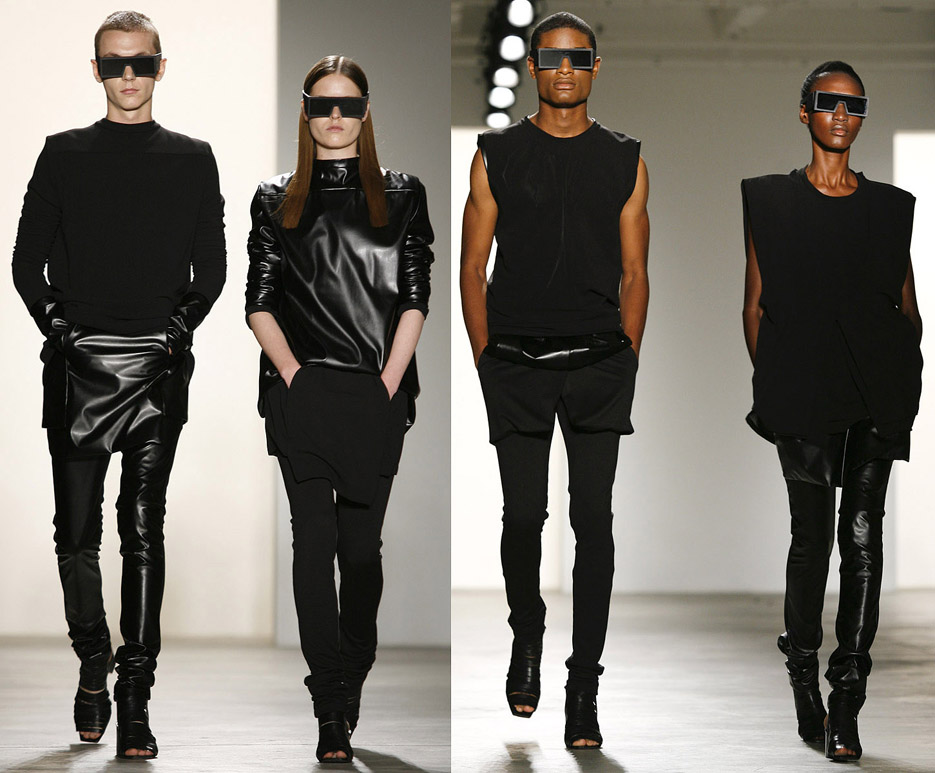 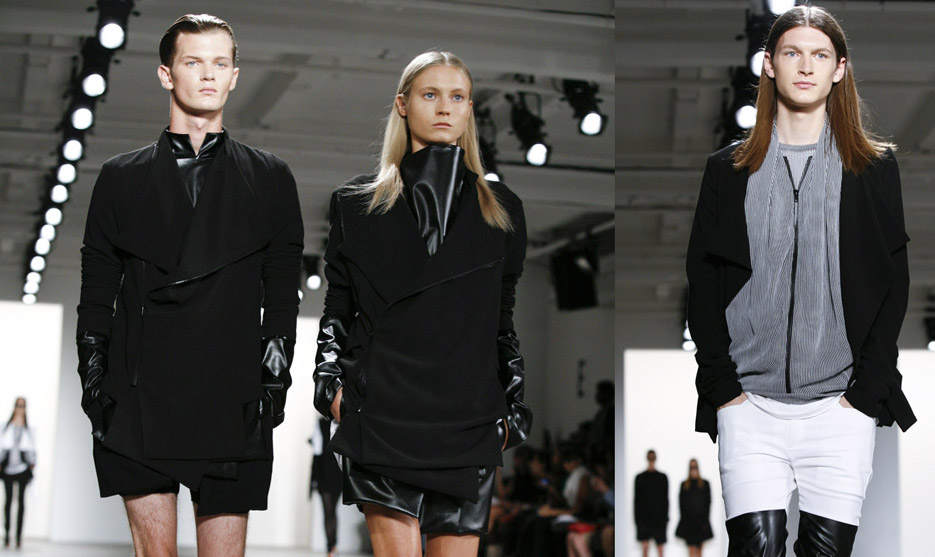 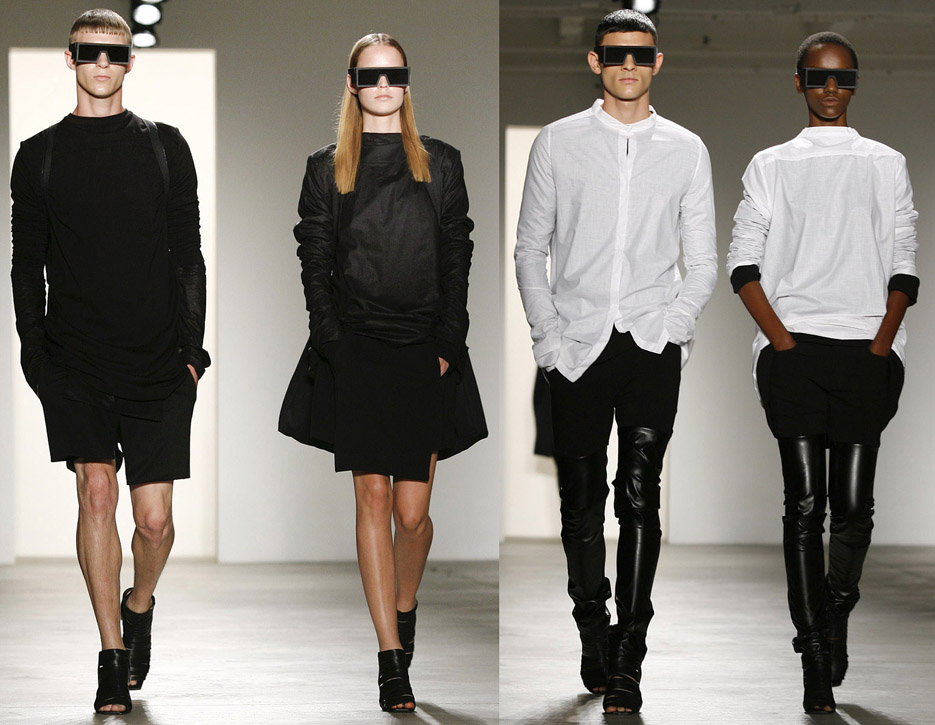 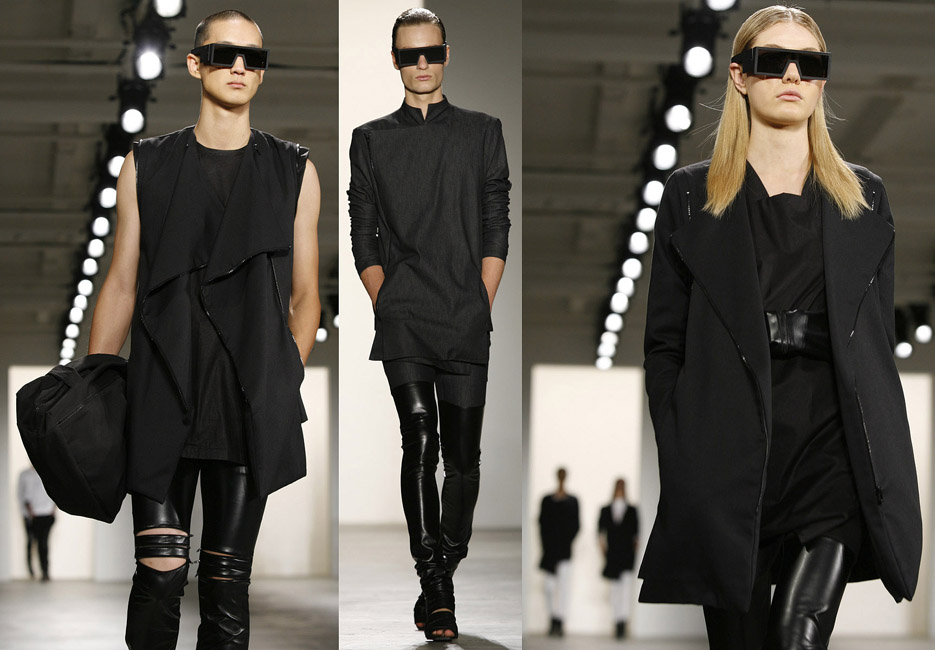 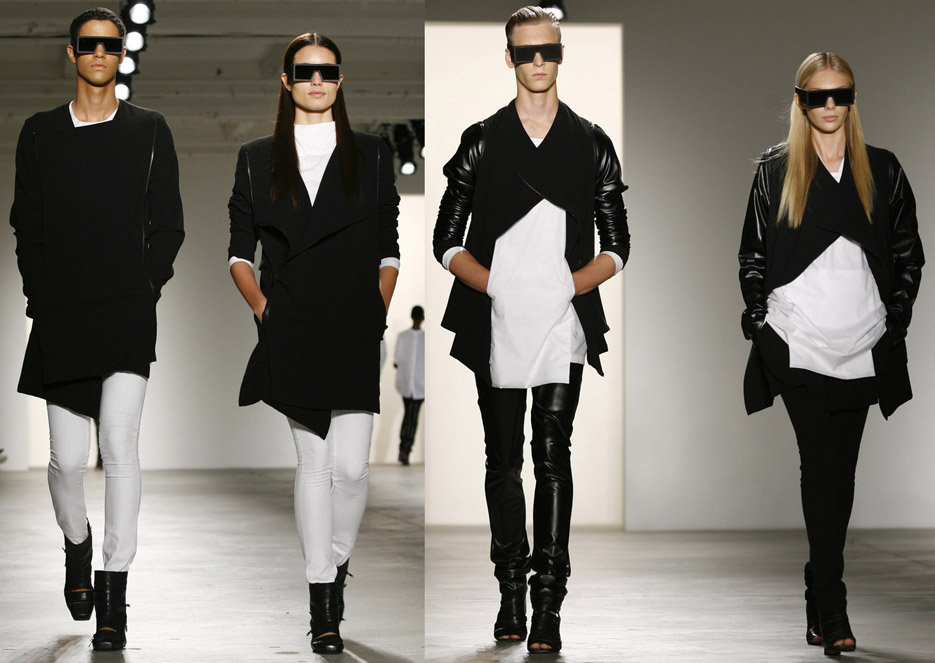 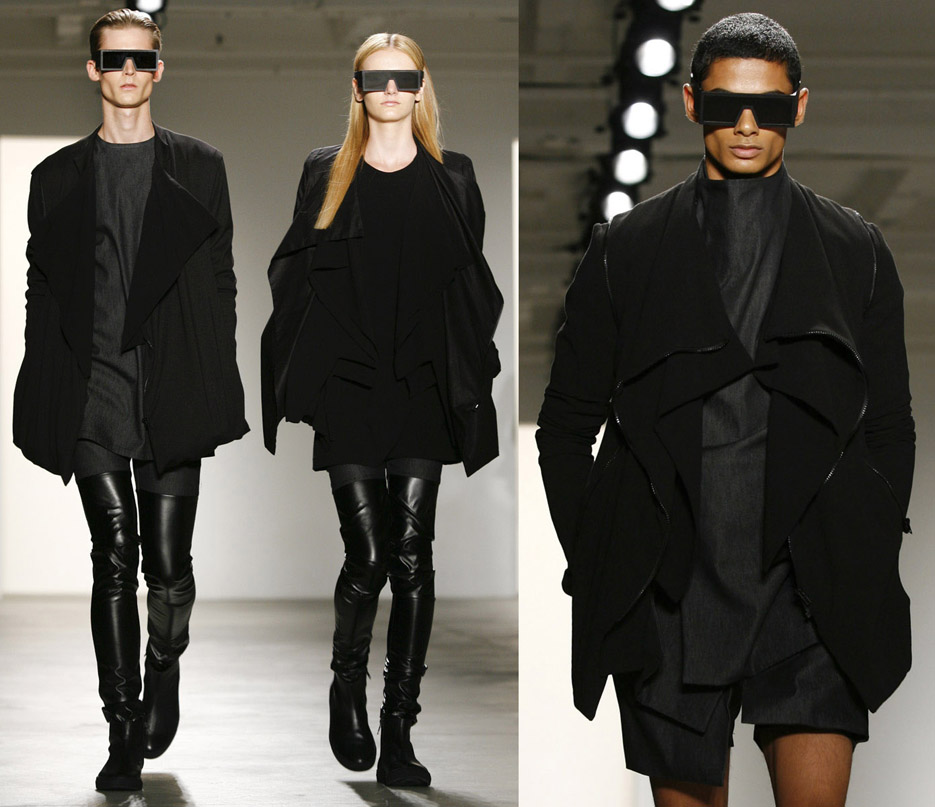 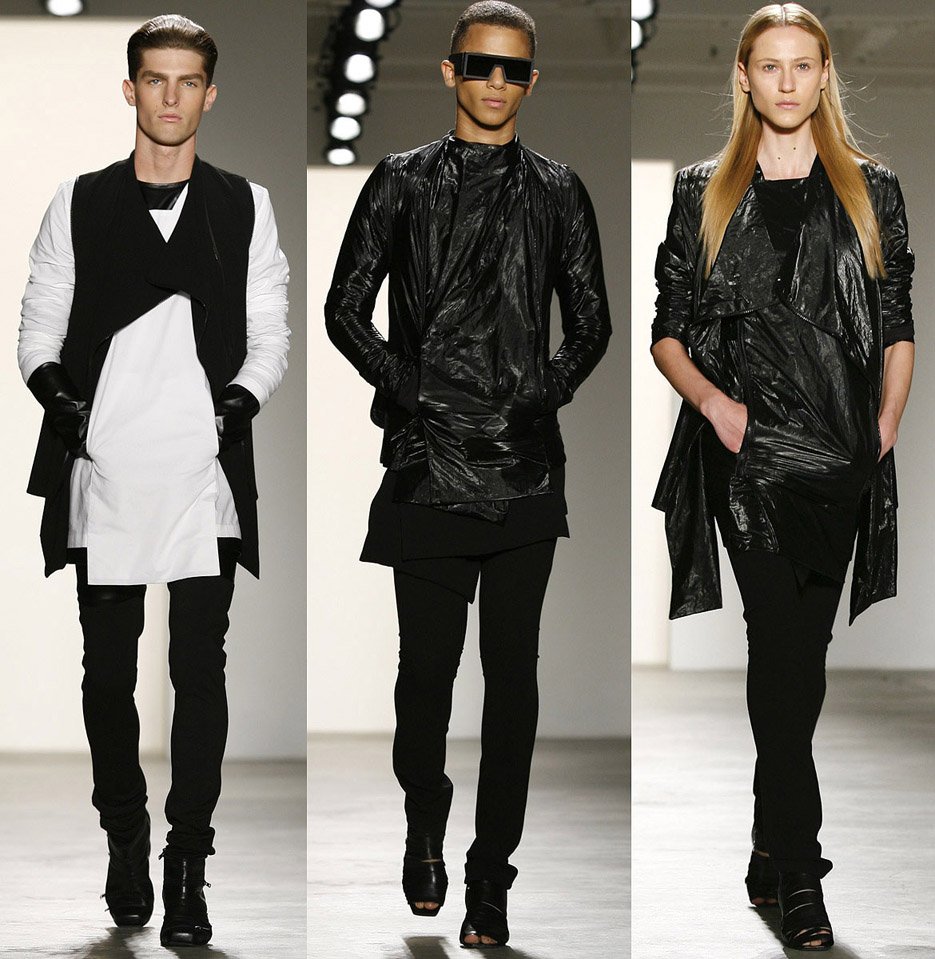 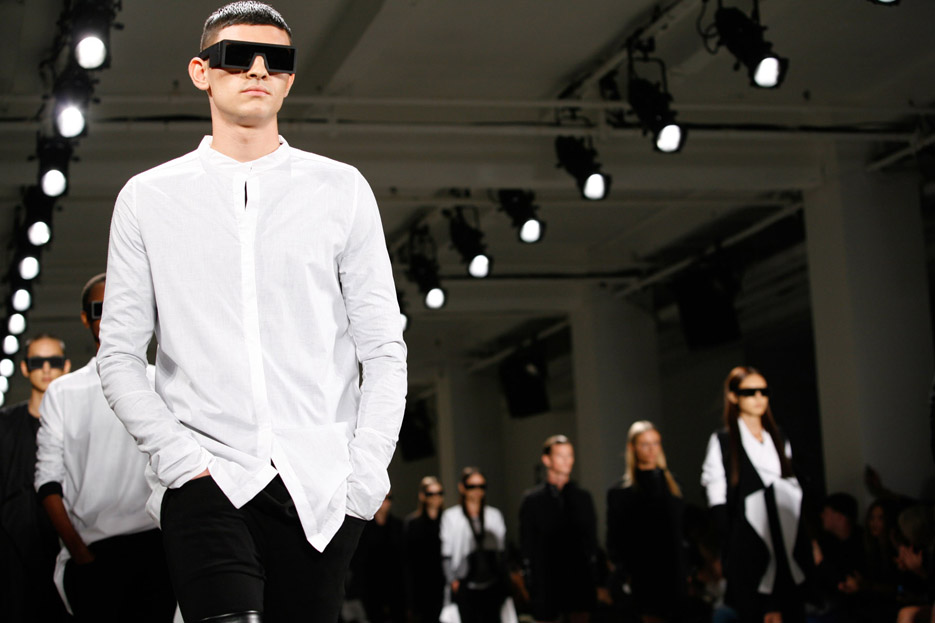 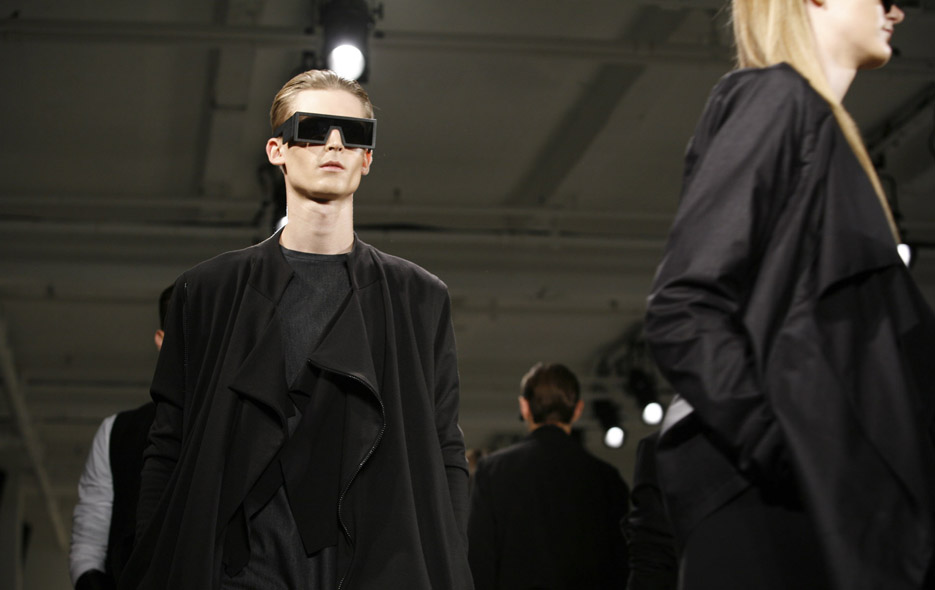 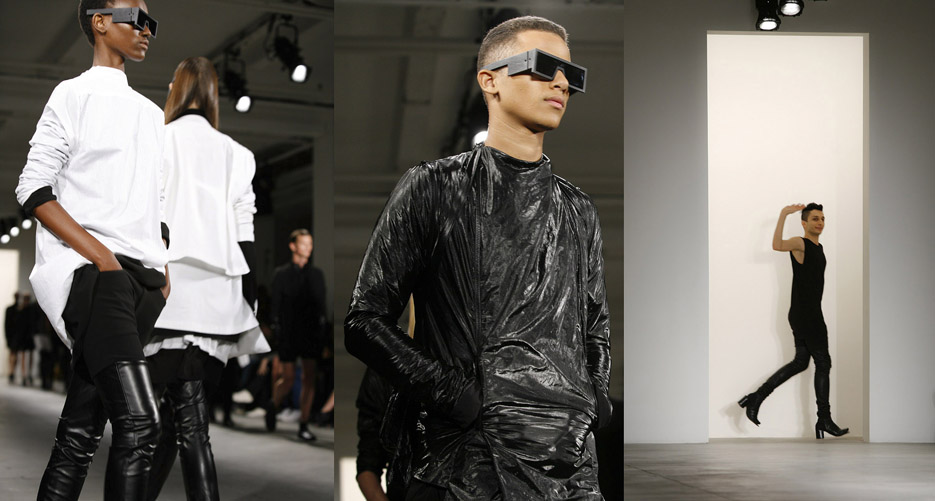