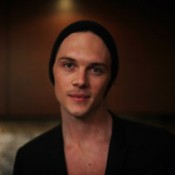 Logan Neizel is known for a lot of things; his Project Runway stint, his boyish good looks, his rock and roll semblance– well, he is all of that, but has moved on way past his Project Runway days, though he feels it was where he was supposed to be then. Now he shows what he can do with leather showcasing neck and wrist cuffs with long, hanging fringes, bandeau, little mini skirts solo and also with attached swatches of long, flowing black or red chiffon, He additionally adds a pop of color with red pieces of leather patches on black leggings (available in all black too) and a red/black stringy yarn type throw-over. Neitzel told me of his influence when he lived in Seattle seeing music and listening to rock which seems to creep into his designs in a modern way and garner his attitude towards leather– which he feels should become your own like an old hole-y rock tee that just gets better and better with wear. So true. This louche look is evident in his pieces, including his own waist-dangling fox-tail. It was also evident in the punk soundtrack backstage and incense infused air out front. These are pieces anyone can pick up to add their own edge – no matter what they’re wearing. END_OF_DOCUMENT_TOKEN_TO_BE_REPLACED

Lars pulled off a charcoal tweed sheath dress with button back fishtail detail that was sexy, classy, and beautiful all-in-one. Another breathtaking piece was an ivory tribal lace powder puff bustier dress, chic and elegant but fun to wear. All of the pieces were well-constructed and well-tailored. 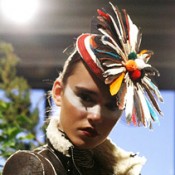 Being away from New York Fashion Week for about 15 years, Byron Lars, a designer with two decades of experience, came back and showed what a real experience fashion should be in his fall 2011 presentation. Walking into the show, we could hear tribal drum playing in the background and, bang, the whole jungle was right in front of us! Inspired by his trip to a Native American Museum, Lars wanted to take us to a “Native Americana” journey this season. He described this collection as “clothes that feel connected to the earth,” and they included a silver glaze cocoon coat, a black and ivory tangled reed mesh twist neck sheath, and a bark faux shearling coat. END_OF_DOCUMENT_TOKEN_TO_BE_REPLACED

For 10 seasons the San Francisco art school has been bringing its graduate students to New York Fashion Week for their chance to shine. This season there were seven collections showcased by different designers, all with distinct and diverse approaches. 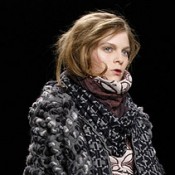 Thinking of Mercedes-Benz Fashion Week, which designer names pop up in your mind? DKNY? Michael Kors? Ralph Lauren? How about Academy of Art University? For 10 seasons the San Francisco art school has been bringing its graduate students to New York Fashion Week for their chance to shine. This season there were seven collections showcased by different designers, all with distinct and diverse approaches. END_OF_DOCUMENT_TOKEN_TO_BE_REPLACED

The First Lady wore a Jolibe piece on her Christmas vacation and it created a nice buzz for the brand. However, it is the couple’s imagination, talent and savvy that will most certainly carry Jolibe into the future of American fashion. 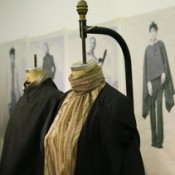 Joel Diaz and Christina La Pens’ Fall 2011 collection continued the striking new direction they forged last season. While they continue to maintain their trademark of manipulating fabric through imaginative construction and technique into unique and stunning shapes, they now do so in garments that are very easy to wear and integrate into your existing wardrobe. The challenge of the marketplace is sometimes very good for designers. It doesn’t always force them into some sort of hackneyed compromise, designers can use their imagination to re-envision how they express their own core design principles while still maintaining integrity and finding expressions that are retail-friendly, yet still very much their own. END_OF_DOCUMENT_TOKEN_TO_BE_REPLACED 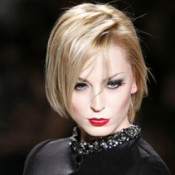 Farah Angsana’s Fall 2011 collection was not for the meek. They never are, but this season had an even more defiant feel to it. Her clothes are for rich extravagant party girls who make no apology for the fact that they are rich extravagant party girls. Embroidery has always been one of Mrs. Angsana’s signatures, but embroidery itself is not all that uncommon amongst luxury clothing designers. What makes her work shine out and on is that she edits it perfectly. Her gowns and dresses never become overburdened with adornments and never come across as garish. The early part of the collection was dominated by blacks and silvers, which fits in perfectly with what you expect from a Farah Angsana collection. The end of the collection found her toning down the fancy needlework a bit and letting a beautiful series of blues, purples, browns, and a dash of red carried her message of bold glamor in beautiful luxurious fabrics. The show-stopping white ethereal gown with feather piping caused the crowd’s pulse to quicken and brought perfect closure to a solid collection. When you’re out at the palace this fall and the sight of a girl glittering and shimmering makes you go a bit weak in the knees, strong chance Farah Angsana gave her a helping hand. END_OF_DOCUMENT_TOKEN_TO_BE_REPLACED

The moonscape print long jersey dress appeared to get the most cameras attention, well-fit and sexy. Another stunning and eye-catching piece was a silk tulle cowled column dress with a hand of glory on the chest. The suits in Mr Laing’s collection also showcased his architectural talents with his precise cuts. Overall it was a very nicely-constructed and sophisticated collection. 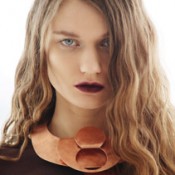 It is interesting to note that if you photograph into the light a person who is facing away from a bright window, the light that finds its way onto their skin looks more than a little bit like moonlight. Dualities exist in nature and legend and design, and it is in their contrast that we often find the most fascinating ideas. Toronto-based designer Jeremy Laing, known for a use of heavily geometric ideas in his work, recently found himself preoccupied with ideas about the winter equinox and the lunar eclipses, and from this he has produced a Fall 2011 collection that references binary notions of moon and sun. Much as Luna and Sol don’t appear together in the sky very often, when they do it is oddly stimulating and somewhat awe-inspiring, and it really works beautifully into what he has created. END_OF_DOCUMENT_TOKEN_TO_BE_REPLACED

Tim Hamilton is sort of rare item as a designer. Yes, he does both womenswear and menswear, but he does more men’s than women’s, which is fairly unusual. His aesthetic works equally well on both sexes, mostly because of his tailoring, which is loose, easy, and is very comfortable. As you can see from our photos, though, it is not unstructured or slouchy. This is not cheap clothing. What a Tim Hamilton design is that makes it unique and worth the money, is bold. 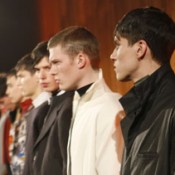 Tim Hamilton is sort of rare item as a designer. Yes, he does both womenswear and menswear, but he does more men’s than women’s, which is fairly unusual. His aesthetic works equally well on both sexes, mostly because of his tailoring, which is loose, easy, and is very comfortable. As you can see from our photos, though, it is not unstructured or slouchy. This is not cheap clothing. What a Tim Hamilton design is that makes it unique and worth the money, is bold. Mr. Hamilton’s work always smacks of a defiance which makes it turn heads. This season his exceptional prints and splendid trousers carried the weight of that message flawlessly. There’s a subversiveness to his work that makes him really enjoyable to cover season after season. So the checklist: high quality fabrics… check, tremendous fit and finish…check, distinctive and rebellious… check. It’s official… Tim Hamilton is cool. END_OF_DOCUMENT_TOKEN_TO_BE_REPLACED

The femme fatale has a new designer. 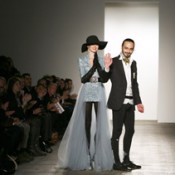 Lebanon has a long tradition of fine fabrics and even finer designers. Georges Chakra, Reem Acra, Elle Saab, and now Mr. Saab’s protégé, Jad Ghandour. This show is his international launch. A first collection is an contradictory event. On the one hand, you’ve had a longer time to prepare than you will ever have again, so it’s usually the best work a designer can create. But what do you create? What is you at your best and will also get you that lovely initial retail attention which is so important out of the gate? Mr Ghandour made a strong and obvious choice in the little black dress. These dresses, though black, were difficult to describe as “little” and are more aptly described as D.B.D. (Dangerous Black Dress). When you name Joan Crawford as your inspiration, and succeed in nailing it, you set a tone so loud it’s unmistakable. The parade of black leather gloves, black wide sun hats, corsets, and stunning powerful dresses that opened the show put any doubt to bed. The femme fatale has a new designer. END_OF_DOCUMENT_TOKEN_TO_BE_REPLACED

Modern day elegance that is ladylike but girly is hard to master. When you are the granddaughter of Grace Kelly’s clothier, it might be a little bit easier. 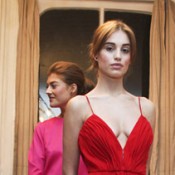 Modern day elegance that is ladylike but girly is hard to master. When you are the granddaughter of Grace Kelly’s clothier, it might be a little bit easier. END_OF_DOCUMENT_TOKEN_TO_BE_REPLACED 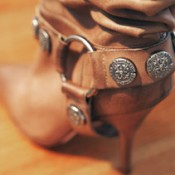