It was nearly impossible to identify individual collections in the rest of the show, due to the wild mixture and diversity in styling. The focal point of this fashion show was not to present a single fashion label or their garments, but to present the audience with a variety of organic and fair trade fashion-savvy garments. 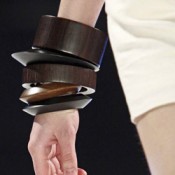 Parallel to the running of New York Fashion Week, the modaCYCLE Europe team covered the Swiss trade fair “Natur” in Basel. The highlight of that event was the big gala on February 12th, a platform for the “Schweizer Prix NATURE”, which is honoring sustainable projects. END_OF_DOCUMENT_TOKEN_TO_BE_REPLACED

The Fashion Coterie is much larger than The Train and Platofrom 2, which I attended yesterday. It encompasses Pier 90, Pier 92, Pier 94, and a large chunk of the sprawling Javitz Center.

I go to the trade shows looking for what is not on the runway, but should be. To do this one has to develop an eye for unusual silhouettes and do a lot of walking. You immediately start to see patterns overlapping to a ridiculous degree, and if you are trying it is not difficult to spot the avant garde in the chaos.

Having walked down the first two long aisles in Pier 94 and seen zero real innovations, I was starting to get frustrated. I can see why most of the brands are represented by PR and sales people, and so few actual designers. Everywhere I looked, riffs on the inane. “Jeans with cut #23,” or “generic seasonal top in 19 colors of jersey with decorative object #537 glued in an oblong ring around the neck.” Where was the breathtaking mastery of craft, or amazing renovations of concept? I want to see “new X jeans,” not “jeans like yesterday but with a new little twist of X.” I saw too many pointless silk screens, affectations, and clueless PR people who couldn’t even tell me the names of the brand’s designers.

That said, half way down the third row I saw something unusual, which led me into the stall of Maxime Cossoguy, a local New York designer. He was displaying his “Drowning In My Sleep” collection. Maxime has been designing for 15 years, and this namesake line has existed for 3 years. Maxime is a FIT graduate, inspired by music and poetry. The logo incorporates the G-clef symbol, and his poetry is written inside some of the garments. He says he travels a lot for inspiration, and has recently been to Paris, London, Amsterdam, Munich, Cypress, Barcelona, China, and Japan. This diversity of influences is well reflected in his small collection, from the triple collar denim jacket to the short bib overalls a model was wearing in the booth. I like his style, and the little twists of the unexpected. Maxime’s work is definitely a refreshing break from the all too standard silhouettes.

Near the back of Pier 94, sharing a booth with Missoni Accessories, I found Masacva, by Russian ex-model Irina Medelie. She showed in Russia last season, but this Spring-Summer collection is her first in the US market. Most of her pieces were relatively standard, but a few stood out, including a fun looking jumper. Her trademark seems to be “simple with detail,” and I think it works. I was told by her showroom reps that many of the buyers were coming in and looking at the Masacva pieces, but not purchasing, because they think it is not conservative enough for their clients. I have to disagree. It is edgy, but not in a liberal way. I think the edge is in the craftsmanship, not so much the lines. She has some beautiful clothing, and I hope to see people wearing it on the street.

I met designer Zoe Zheng in her Zoe Couture booth. Usually I avoid even glancing at the booths of small American brands which label themselves as “couture,” but I saw the side swept sweater before the sign on this one, and was pleasantly surprised. Zoe has some very fun looks. She likes her customers to be able to play with their clothing, and proudly says “if people buy one or two pieces they can have five silhouettes.” Zoe’s family manufactures cashmere, and her first collection was all cashmere. Now she is moving on to incorporate a wider range of materials, and this is her first spring-summer collection. For inspiration, she spent time looking at paintings in the Getty Museum. Well-cut cotton, and a few nice bits of knitwear. Classification: luxury casual.

I moved over to Pier 92, where I spotted the creative cuts of Dimitri Tcharfas and Shannon Nataf, in their Suh-Than booth. The line features a lot of multi-layer material mix garments; denim, linen, leather, silk, and suede incorporated together in vest-jacket-dress sorts of gestalts. I saw a lot of simple but dramatic silhouettes, with entertaining flares and things like little gull wings the wearer could unbutton and play with in a lot of ways. The line is 4 years old, and this is their fourth collection. It is titled “inner workings” and is inspired by the surf, the way you can see the sand and shells under the surface after a wave crashes in. Using sheer materials layered over architectural lines, they have worked to reveal their skillful European-style tailoring, making a unique statement about quality of work, and taken a bold step where they have risked showing any flaws in the assembly of the garments. Fortunately, there seem to be none. Beautiful lines and a lot of creativity make this duo one to watch.

Just as people were starting to shut down and close up their racks, I spotted some interesting webbing on a pair of shirts labeled Akiko, which turned out to be Akiko Yasuda. Looking closer I saw other interesting details in her garments, and when I started asking questions, her showroom rep got me on the phone with Akiko herself in Los Angeles. Akiko is originally from San Diego, and she related to me that the inspiration for this line was a specific Japanese tea garden. This is the same beautiful garden she went back to when it was time to shoot her look book, and flipping through it, the pieces really do look like they belong there.

Today I took a long walk over to 11th Avenue and 28th Street to visit a set of garment industry trade shows called The Train and Platform 2. This is the third season I have gone to see them and I am starting to get a sense of the atmosphere. The majority of the booths display rehashes of yesterlooks, but there are a few gems to be found. Here are the ones that caught my attention today:

Yes Virginia by designer Virginia Lato had some interesting coats. What drew me in most was the bits that had been made using lasers to cut leather. The detail was stunning, but they were also very light and flowing. An interesting technique with interesting results.

Stephan Pelger, a collection from Romania, included a simple black and white dress that featured a wow factor hand-painted twist in the front.

Nationalité Dada displayed fun things. Designer Edita Lupea was manning their small booth lined with unobtrusive animal design decorations, including an odd white bag with two wide tabs for closure. Another design element they were featuring was an infant wrapped in a blanket, because designer Joana Covalcic just had a baby.

One of the most interesting stops I made was at the KiKKa Fi booth. At first I assumed an asian influence, but after a moment it seemed more Asian influences by-way-of Frank Lloyd Wright influences. Designer Clara Longobardo has a background in theater costume design, and her sculpture and costume-inspired pieces are very dramatic, like street-ready opera costumes. The garments are very architectural, and can be reconfigured in innovative ways. They are all hand made in Italy. The best pieces are made in very limited runs because the fabric is so rare.

I then moved down to the Derri Design booth, where I found more of the laser cut leather pieces, also seen in the Yes Virginia line. Derri is a group of 200 Turkish leather manufacturers, and their clothing is designed by Italian Craig Leeson. This is their first collection released in the USA. They have clothing for men and women, including some very interesting spring jackets.

Next down the line was a group called Showroom New York. I was told they are sponsored by New York’s own Garment Industry Development Corporation. Showroom New York features emerging designers who produce their lines locally in New York. I met designer Deibe Rondon, an FIT graduate, who is one of several designers supported by the program.

Sticking out into the aisle along The Train’s long hallway was an elegant black dress by Marie Saint Pierre, of Montreal. The brand is 21 years old, and the garments show the designer’s experience. Very sculptural, all handmade in Montreal, with a lot of blacks and earth tones.

Elena Perseil, a French designer manufacturing in Romania, was manning her own booth full of hand made garments for the “urban woman in luxury.” She has a whole story going about her inspiration for the current collection, and says her summer looks “are about a woman who is loving and finding herself in India.” When I showed the look book to Freda Henry she said, “that’s not India, it’s Bali!” Regardless of the look book photo shoot location, Elena had some beautiful pieces with impressive details.

There are a lot of people showing handbags at these shows, but a true stand out was Wendy Stevens, with her stainless steel accessories collection. Each piece is handmade by Wendy herself, and she has been on this same kick for 23 years. Her “fashion touch” is changing the color of the leather bits from season to season. She said they have extreme durability, and I found the dedication to function inspiring.

Mirjana Scepanovic is a Serbian living in Toronto, and she has some interesting handbags as well. She says she always starts with geometry and takes an architectural approach. She is inspired by modern interior design, but mixes in a touch of the organic to add warmth.

Xenia Design of Croatia was displaying a cool crumpled trench coat. On the outside are lightweight abrasive metal fibers, and on the inside is a soft lining. It is weatherproof and very operatic. The designer is Ksenija Vrbanic.

I was just about to turn around and head out when I walked up in front of Taipei designer Sophie Hong’s display of easy-to-wear light natural silk, linen, and leather. Absolutely gorgeous clothing. She takes the rich historical Asian design aesthetics and brings them skillfully forward in time. Her pieces look like they belong among the most elegant steampunk “tomorrow is yesterday” garments. Each piece has a great collar and fantastic detail. Her fabric choices are top notch as well. This is what I want to see when I go to trade shows. Excellent craftsmanship, the designer’s unique voice, and detail that knocks your socks off. Thanks for ending my day with a “wow,” Sophie!